Posted in Around the World by Lorenzo

France is a country with a great deal of expertise in the luxury industry. Magnificent real estate, jewellery, leather goods, wine-growing, are just some of the countless areas in which France has a reputation for excellence. This is also the case in terms of tourism, where a few French towns and cities really stand out by offering quite exceptional services to international tourists who come to spend a stay there. We have selected 7 of the most beautiful destinations in France for you.

A small fishing port that has become the capital for the European jetset, Saint-Tropez’ history is full of glitz and glam. It all started with a certain Brigitte Bardot, a young French actress who fell in love with La Madrague, a seaside house in Saint-Tropez one fine day in 1958. She was to make it her home, her boudoir, her private garden. But Bardot arrived in Saint-Tropez at around the same time all the other Parisian celebrities descended on the town in the 50s and 60s, to enjoy the beach and sun in the south of France.

From then on Saint-Tropez has enjoyed unwavering success. Nowadays, Saint-Tropez is also a luxury town. The waters there are full of boats where film stars indulge in flowing champagne, and the same goes for the town’s port. In the surrounding area and the suburbs especially, there is a real wealth of luxury residential real estate that is particularly popular with the rich clientele from the Gulf countries and Russia. In the town’s streets, there are obviously big international brands who have opened jewellery and fashion boutiques.

And in the streets themselves, you won’t see the kind of French cars you saw in De Funès films, in fact you’re more likely to see racing cars parked around town. All the same, Saint-Tropez has managed to retain its southern French village charm. There is no denying that there’s a strong tourist presence in summer, but it evaporates as soon as the holidays are over. The city is therefore pleasant and sunny and its luxury properties, which are available for purchase or for a seasonal rental, make it a must-visit town in the south of France.

To talk of Cannes is also to refer to the adjacent towns such as Mougins, Mandelieu-la-Napoule or Vallauris. Cannes is a familiar name for all movie buffs due to its famous festival. In the spring of each year, stars from around the world come to defend their films, and parade in front of the photographers. All of it takes place in the sunny atmosphere of the Croisette, the city’s famous coastal promenade. People descend from the town’s luxury hotels, and dine in the poshest restaurants.

But Cannes isn’t limited to this magnificent festival, because the city holds events on an international scale throughout the year. The reason we’re discussing luxurious summer holiday spots in Cannes is because the entire area surrounding the town is perfect for an exceptional holiday. Luxury real estate is omnipresent here. Hidden in the lush vegetation of the French Riviera, its villas and mansions are not always easily visible to the general public.

But when you know where to look or how to get there, this area is full of unique locations. Just check in with a luxury real estate agency, and you will see the large number of gorgeous properties available in and around Cannes. There are a lot of them, and they always come with a terrace, a swimming pool and above all a magnificent landscaped space, extended by the region’s lush vegetation and the incredible view over the Mediterranean.

You can’t evoke Cannes or Saint-Tropez without mentioning Nice. As the central city of the French Riviera, it is a regional capital whose ambiance and attraction for international visitors is one of the latter’s major assets. Additionally, the towns surrounding Nice and extending along the coastline are all in the same vein. and are particularly attractive in terms of tourism. These include Menton, St Jean Cap Ferrat and Beaulieu sur mer. In all of these towns, you never stop being blown away by the sight of the many luxury properties, villas, and other palatial residences that overlook the sea.

The rich, dense vegetation, the architectural splendour and the exceptional setting all combine to make a magnificent base for exceptional summer holidays. You’ll be wowed by the incredible rentals or properties for sale on offer from prestigious estate agencies such as https://www.haussmannrealestate.com should you wish to settle here. Sea lovers will see these towns as a good opportunity to set sail and to admire the region from the Baie des Anges. If you’re more of an urbanite, Nice has historic districts to tempt you into wonderful walks where you can discover its architectural or cultural heritage, such as the Matisse museum.

Saint-Jean Cap Ferrat is synonymous with luxury on the French Riviera, as the land around this town has been requisitioned for decades for the construction of the most incredible villas in Europe. The prime location of this peninsula, which is close to Nice, features a rocky and tree-covered promontory affording you a magnificent view of the sea and the Baie des Anges. Its situation, which is both isolated yet close to everything, the beauty of the setting, and the historic predilection for an exceptional region make Saint-Jean Cap Ferrat an incredible town.

The Ephrussi-Rothschild villa is a fantastic example of what this peninsula offers in terms of real estate. While the villa now belongs to the State and is used for various receptions and demonstrations, it represents the architectural expertise and the love of luxuriant gardens that you find everywhere in the south of France. If you’re looking for rental or investment property in the south, St-Jean Cap Ferrat  is of course a prime location and the Ephrussi-Rothschild villa is an example of the excellence of the region in this respect. 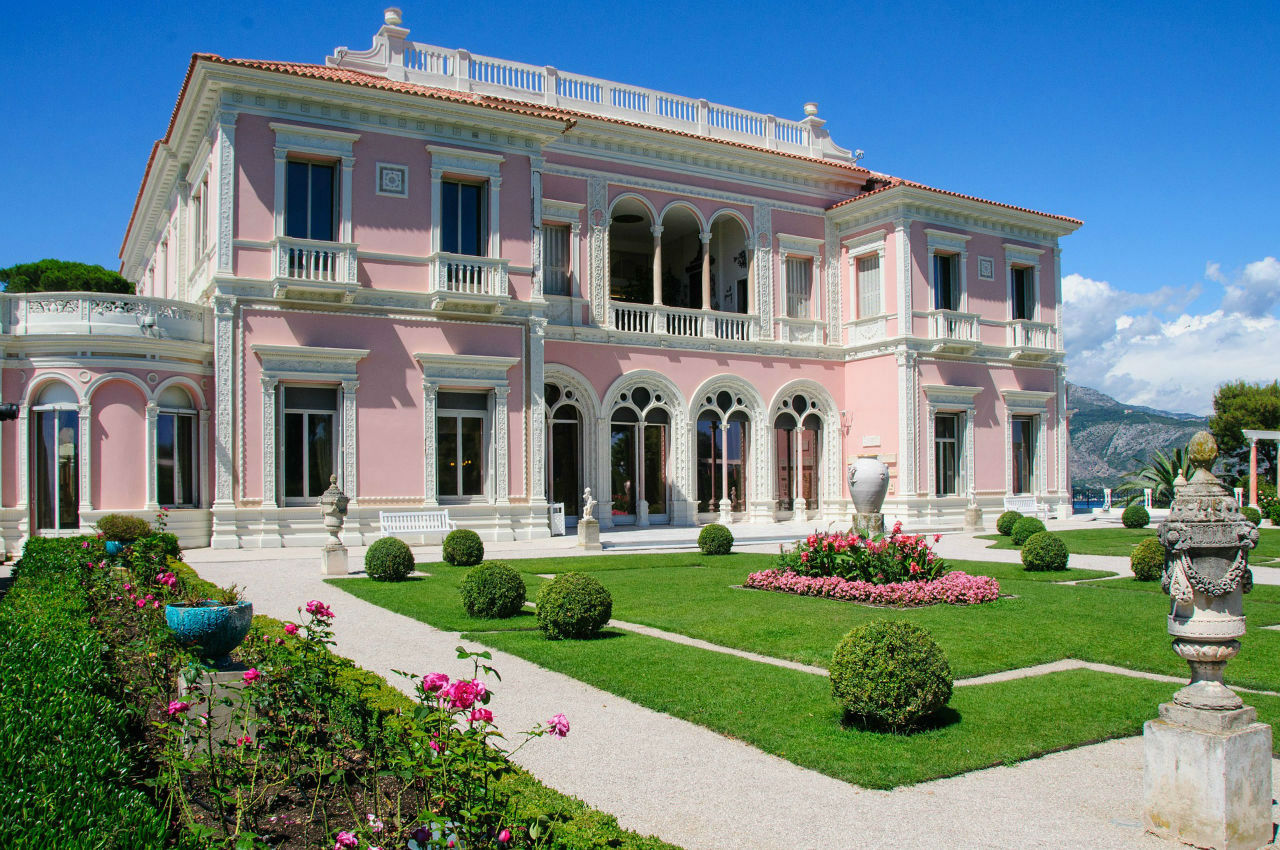 Biarritz has long been hailed as a remarkable town. This actually goes back long before the transformation of a Napoleonic mansion into what would become the Hôtel du Palais, the famous pink hotel which is the epicentre of the city. Today it is the town’s most iconic landmark, the image that makes it a rich, luxurious city, and a symbol of the aristocracy of southwest France. But nowadays, reducing Biarritz to just its hotel would be a shame. The whole city deserves a visit. The beaches, a surfer’s paradise, are superb, and the town itself is perfect for memorable family outings.

The city streets are also a good example of Biarritz’s grandeur and give it an undeniable architectural cachet with all the luxury boutiques. But Biarritz is also part of the Basque Country, a country with a strong identity which is clearly and proudly in evidence in the town. The two languages, the dual identity and the history of the region all resonate with the Basque spirit when you meander through Biarritz’s streets and the surrounding area, adding undeniable charm to this little corner of France which wasn’t lacking for appeal already.

It’s impossible not to immediately link Paris with luxury and prestige. With its department stores, fashion houses, truly iconic monuments, grand restaurants and hotels with international reputations, everything in Paris exudes luxury, calm and indulgence. Paris is an extraordinary place to visit, whether you come from somewhere else in the world or live two hours away by car. Many come to Paris for its museums, and the Louvre first and foremost. Others come to Paris for its typically French districts, with Montmartre at the head of them. And people also flock to Paris for its shows, from small theatres to large events spaces like Bercy. People love Paris for its ambiance both in the daytime and at night, and for its quirky as well as conventional gathering places. Paris has it all, and whatever you consider as a luxury holiday, Paris has it covered.

The extreme south of France attracts wealthy property owners, stars and rich tourists from all over the world. But the north of France, despite being less sunny, attracts just as many. This is the case for Deauville, whose famous boardwalks and no less famous American Film Festival make it a unique town. So there’s a lot of hubbub in September. But in reality, there’s a general feeling of excitement throughout the spring and summer season. Deauville is in Normandy with its flower-covered coastline. Horse enthusiasts know this region well because there are a lot of stud farms here. People also come to Deauville for the hotels, which are obviously luxurious. In addition to the hotels, the area is not lacking in luxury flats and prestigious apartments either, and all compete for acclaim in their decor.

The pearl of them all is undoubtedly the hotel that has become Deauville’s most iconic landmark, the Normandy Barrière, seconded by the Royal Barrière. These majestic, historic hotels are the very essence of chic. But Deauville is also a gaming city with its casino, as well as being a shopping city with big international fashion houses who all have their stores in the town centre. In the past as well as the present, the town is home to many Parisians who have brought the luxury of the capital to the most beautiful seaside resort in the north. Whether you are looking for a home away from home for a weekend or you’re settling there for the rest of your life, Deauville offers an exceptional setting where you can enjoy the elegance and attraction of Normandy in all seasons.

There are people who scour the planet to find the most beautiful natural landscapes. And there are those who know they’re to be found in Corsica. It’s a wild country, the result of a mountain that erupted from the sea, giving rise to dreamlike scenery. Corsica is a proud island full of strong values. Its mystery, character, history, and its natural heritage attract many tourists. From the white cliffs of Bonifacio, the GR20 in the mountains, the creeks of Piana to the beaches of Porte Vecchio, there are a thousand reasons to go to Corsica. Don’t look for mass hotels, the ones with hundreds of rooms that are as big as holiday resorts. Instead, seek out villas hidden in the maquis, truly prestigious real estate, and little houses by the sea with typically Corsican architecture for a luxurious location full of unsuspected comfort, where you can enjoy the Mediterranean sun.

It’s impossible to begin a search for luxury locations to holiday in without thinking of the Arcachon basin. Cap Ferret in particular, opposite Arcachon and its famous Dune of Pilat, is the place you will find the most authentic atmosphere. Architect’s villas stand side by side, hidden under the pines. Despite the fact that it’s a popular tourist destination, this peninsula has kept its charm, a long way from the stream of cars in the town of Arcachon, located opposite. People come by bike, enjoy the sea, or roll down the sand dunes, and more generally fall under the spell of the incredible spectacle provided by the sea that covers the Argun bank when the tide is up. Needless to say, real estate can only be found in Cap Ferret for those who can afford luxury villas and exceptional properties.